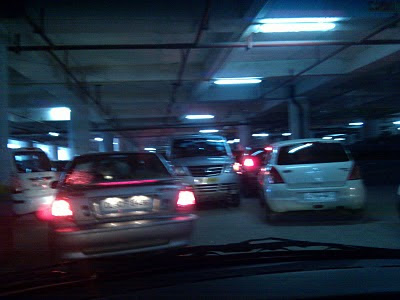 Sans context, this photo could be a bit difficult to decipher, so let me help: In the exit-the-parking-garage process at my office, there are two lines of traffic both moving the same way. It's a one-way path. That mini-van coming toward the car? It's going the wrong way, literally making its own way down the line by forcing all the cars going the correct way to move aside. Ah, India.

I had a fantastic first day back at the Gurgaon office today -- after nearly two years of being away -- with this traffic being the only mild annoyance, aside from the wall of sleep that, as I had predicted, hit me around 3 p.m. (Frequent walks around the office kept me awake until I got home and could nap at 6:30.) It's been wonderful to see and catch up with old friends, get a look at the office renovations and enjoy the less-harried pace of work (there's lots to be done, but fewer distractions).

My hosts treated me to an amazing cross-Indian-culture dinner this evening: daal makhani made by one of their mothers; Bengali fish; paneer; rice and rotis. And Rasmalai for dessert! Yum. Suffice to say I'm eating quite well.

Now off for an early morning video conference with the 'home office,' followed by work, lunch at Punjabi by Nature (grilled paneer tikka!) and hopefully a stop at the gym.
Posted by Unknown at 4:24 PM No comments:

I’m back! I’ve arrived and spent my first “night” (do 3 sleepless hours in bed count?) in Gurgaon.

It’s lovely thus far. I’m staying with friends, and their apartment is Spartan and comfy; the road outside looks to be freshly paved; and perhaps most influential of all, Delhi International Airport has transformed itself into a palace.

The Delhi I arrived at two years ago resembled so much the Bombay I’d visited two years prior to that: distinctly third world, with its military presence and its simple, dirty, stuffy corridors. Last night, I was treated to what I’ll call bright and shiny things: New people-mover stretches along the extensive arrivals level; fresh, clean, unstained carpet; bright lights; alcoves with not only clean benches for sitting but also green, fresh plants. LED displays blinked everywhere and Pepsi-product-filled vending machines, which I’ve very rarely seen in India (why have a machine when a human soul can make money doling out drinks?) dotted the terminal.

Passengers exiting the terminal into Immigration and Baggage Claim are greeted by art, with a wall full of the hands art installation. Uncharacteristically clear signage guides visitors through arrivals lines that don’t intimidate. In fact, the lines move quickly! Officials smile and are helpful. A customer service rep near baggage claim takes a satisfaction survey. An AirTel representative turns on a bank of phones for curious travelers.

Outside, the sidewalk is nearly clean, and drivers line up in an orderly line against the rail with their placards. My driver is here! And so is another AirTel booth, this time with a man who can recharge my Sim card. Now a quick stop for bottled water – more smiles! – and then off to perhaps the greatest adventure: a 7-story parking garage. Praveen, my driver, is beaming. And in truth, this is undeniably fancy stuff. On every other arrival in India, I have dolefully followed my ride – in-laws-to-be, fellow expats, pre-paid cab drivers – into a dark, poorly lit gravel or roughly-paved lot, filled with cabs parked willy-nilly, many housing sleeping drivers, in order to exit the airport. Tonight, instead, we’re filing orderly out of a well-lit structure complete with attendants taking tickets prior to finding your car, just like they do in the states. Could it be that India is catching on to efficiency?

I have twelve days to find that out. I hear movement outside my door; time to be up and about!
Posted by Unknown at 7:49 PM No comments: